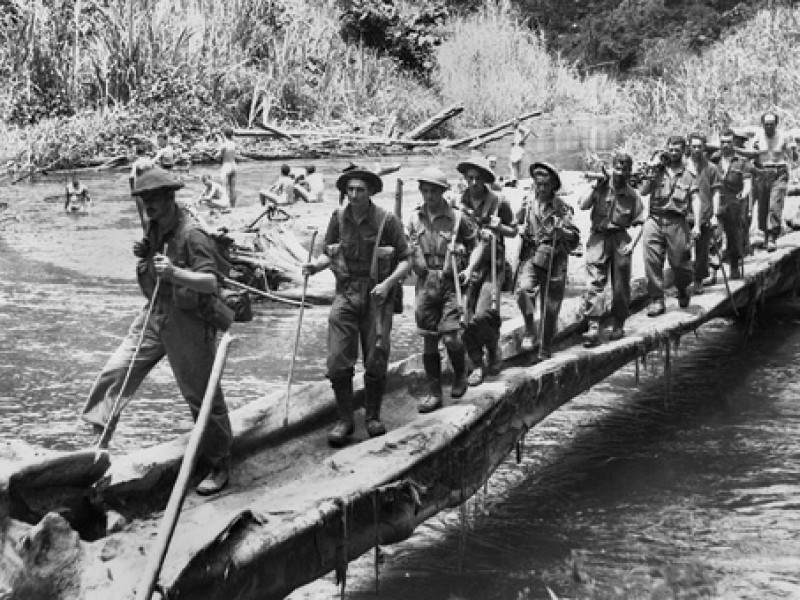 In May , villagers at Kovelo — near Kokoda village — blocked the track after complaints that money collected from trekking fees was not being distributed fairly. Since , there has been a rapid increase in the number of people walking the track see table at right. Six Australian trekkers have died from hyponatremia while attempting to walk the track. Four of those deaths occurred in , with two in the same week in April and another two 8 days apart in September and October. As the trail's popularity increased, there were calls for more regulation of trek operators, with some operators taking as many as walkers in a group. A second radio channel was also installed to deal with emergencies and maintenance work. In November , Australian paralympian Kurt Fearnley born without the lower section of his spine [18] completed the track, crawling north to south, in 11 days.

A multiple paralympic gold medalist T54 Marathon in Athens and Beijing , he used customized shin pads and wrist guards. His journey was to raise awareness of men's health issues and was inspired by the story of Corporal John Metson, who crawled the track for three weeks, refusing the assistance of a stretcher on the grounds it would burden his comrades. There has been much debate in Australia about whether it should be called the "Kokoda Trail" or the "Kokoda Track". The monument at Owers' Corner uses both terms: "Track" on one side and "Trail" on the other. The earliest mention of the route in an Australian newspaper may be in The Argus on Wednesday 29 July in a map when it refers to "the Buna Kokoda-Moresby track".

According to historian Stuart Hawthorne, before World War II, the route was referred to as "the overland mail route" or "the Buna road". He states that "Kokoda Trail" became common because of its use in Australian newspapers during the war, the first known instance being in Sydney's Daily Mirror on 27 October The Australian War Memorial AWM says that " trail " is probably of United States origin but has been used in many Australian history books and "appears to be used more widely". Despite the historical use of "Trail", "Track" gained dominance in the s, with the Australian Macquarie Dictionary stating that while both versions were in use, Kokoda Track "appears to be the more popular of the two".

The track can be walked from either direction. It can take up to 12 days to complete, depending on fitness and rest time involved. Locals are renowned for being able to regularly complete it in 3 days. Villagers are increasingly taking part in the commercial opportunities created by the growing number of tourists; in October , some were known to be selling cans of soft drink and beer at double the price payable in Port Moresby. Licensed operators carry first aid kits, undertake first aid training, carry radios or satellite phones, respect the people who live along the Track and ensure their porters and guides are treated in a professional manner. A list of licensed operators is available on its website.

The Kokoda Challenge Race is an endurance running race that was revived on 27 August The race originally ran in but stopped before becoming an annual event. The Kokoda Challenge inaugural race commenced in The current race record holder in both directions is Brendan Buka, with a best time of The inaugural race of 27 August was won by John Hunt Hiviki, who completed it in 22 hours, one minute and 14 seconds. On 27 August , Brendan Buka, a year-old Papua New Guinean trekking porter from Kokoda , conquered the trail from Owers' Corner to Kokoda in a winning time of 17 hours, 49 minutes and 17 seconds. The race record was again broken by Buka in the event when he completed the track in 17 hours 20 minutes on 26 August , running in the reverse direction from Kokoda to Owers' Corner.

Megan Davidson, a trek leader with Back Track Adventures, was the first Australian female to run the track in 36 hours, coming 12th overall. On 31 August , Buka once again set a new record, with a time of Cyprian Aire came third with In , the Kokoda Challenge Race was run on 27 August. The race started from Ower's Corner and finished at the new Kokoda Archway. The race was organised and sponsored by Kokoda Trekking. Brendan Buka once again won the race in a time of but did not break his record.

Australian Broadcasting Corporation. Online News. Today it takes the average trekker 10 days of walking. Paths are steep, slippy and a perfect ambush zone. Which brings us to disease. Sickness claimed more men than combat approximately Australians were killed along the Track alone and over 1, were wounded. Casualties due to sickness exceeded 4,; the total number of Aussies killed in the broader war around PNG and surrounding islands was closer to 7, Infected cuts, scrapes and combat wounds became ulcers that stripped flesh to the bone.

And all the time these men were fighting for their lives and — during the Kokoda campaign — moving, on foot, through those hideous mountains. The enemy were up the same creek. Not that the diggers knew this — at least, not at the start. The reality was far different. The elite Nankai Shitai units spearheading the Japanese attack were veterans of combat, imbued with fanatical loyalty to their Emperor and a mission to utterly defeat their enemy.

But I think the Australians had more initiative. They were also cruel. Torture, rape and cannibalism were all features of this war. Despite their early successes — famously getting within sight of Port Moresby, from where it was feared they may invade Australia, or at least cut it off from the rest of the world — the Japanese overextended their supply lines. That, combined with Allied air superiority, meant their men were soon starving.

And in desperation, they began eating dead Australians. As Australians began to push back along the track, they would periodically discover corpses with strips of meat taken from calves and thighs — and those parcels of meat, wrapped in leaves, in the pockets of dead Japanese. The pattern continued throughout the PNG war. The soldier did not say whether he had eaten it himself. I saw evidence, later. We lost one of my boys in an ambush. When we went back with a fighting patrol we found every bit of edible meat had been cut off his body. And officially, the invading Japanese intended to treat locals with respect — but reality was very different.

Villagers in Japanese territory were press-ganged into porter service alongside other labourers imported from Rabaul, Formosa and Korea, then literally worked to death; women were routinely raped and suffered sickening acts of sexual mutilation. One woman was found bound to a hut by arms and legs with 70 condoms around her. Such acts were not reserved for natives. Two Australian missionaries — May Hayman and Mavis Parkinson — were captured on the north coast in the early days of the Japanese invasion, after being betrayed in hiding by villagers. One friendly local who spied from afar reported they were held for 24 hours in a building which was visited by a number of Japanese. The next day they were led and a soldier grabbed Miss Parkinson and tried to hug her.

She pushed him away — at which he drew a bayonet and stabbed her in the throat. Miss Hayman was forced to blindfold herself with a handkerchief and bayoneted. Then there is the torture. Captured Australian soldiers were mutilated; some were deliberately tortured so their screams — or the sight of their savaged bodies when it was done — would draw comrades into rescue missions that became ambushes.

For transparency, it must be noted some Australian troops treated Papuans badly — as some civilians had done so before the war — mainly by pressuring them to work as labourers. Among those who did were the militia men of the 53rd Battalion. Unlike the 39th, who defied the slur to become underdog legends, the 53rd went to pieces at the famous battle of Isurava, fleeing and forcing natives to carry their gear back as the remnants of the 39th and regular AIF units battled for survival against overwhelming odds. That they were even in the situation at all reflects more on our top brass. While the list of leaders at brigade level and below along the track is a rollcall of heroes, the high command was rived with infighting among old men as concerned with their positions as they were with the fate of the men in PNG.

That ignorance stretched to the Australian public, with iron-clad censorship more suited to Nazi Germany making it impossible to reveal anything like the truth of what our soldiers were facing.